What’s The Buzz About Putnam County?

Central's fall musical is sure to "bee" a hit 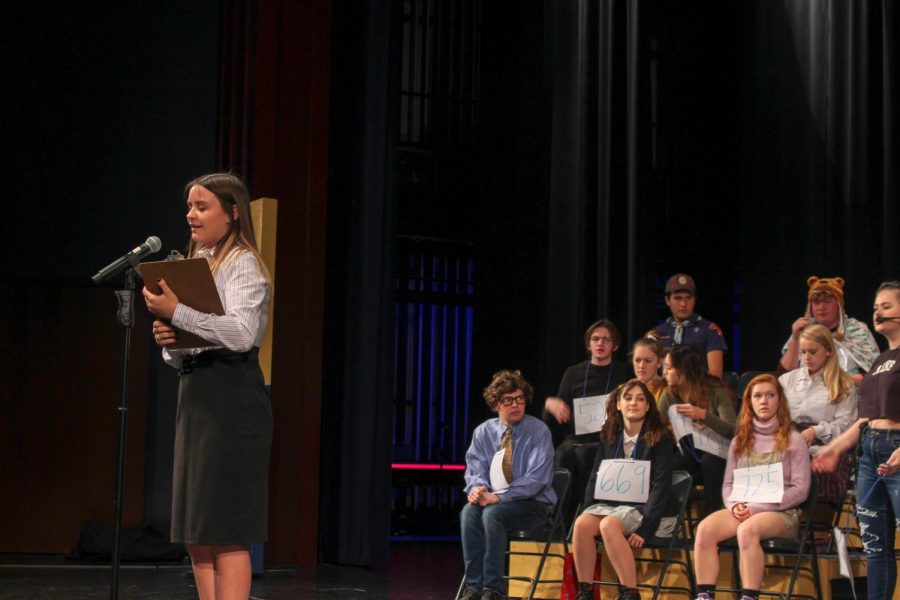 The lights are up, the mics are on, and the stage is set.

Every member of the cast was specially selected for their role, with each having various goals in mind when they auditioned. “I auditioned because I saw myself within the character, and I wanted to show that even though I am so alike with this character, I can take it so much farther,” says Hayden IntVeld, who is playing Leaf Coneybear, a homeschooled boy who laments the fact that he’s “not very smart”.

Others wished to expand their acting resumé. “It sounded like a fun musical to be in and I wanted to get more auditioning experience,” explained Madeline Sotos, who plays Olive Ostrovsky, a girl with absent parents who finds comfort in her dictionary.

The show is highly creative in its manipulation of time, having characters flashback in time, or be carried off to their dreams through fanciful lighting and wonderful song, making it the best part to several. “My favorite thing about the show is how it shows the progression of each character’s story. It gives a backstory through little tableaus and just how it’s able to impact people’s lives,” says Nick Vazquez, who plays Charlito “Chip” Tolentino, last year’s winner who has a problem with unfortunate distractions.

Beyond just who’s the best speller, the show also brings a lot of light to complicated problems that many kids and preteens deal with. Sara Holtom, the crew manager, says, “It’s talking about issues that happen throughout puberty and adolescence but then it’s also adding humor and comedy to it through the songs. The way the characters portray themselves so it’s not like they’re overdramatizing what they’re going through but they’re still making [their problems]  known.”

To sum it all up, why should you go see the show? Beyond just supporting your peers and their incredibly hard work, Vazquez makes a solid point. “People should come and see Putnam because of the extraordinary acting talent that is present. And also because it’s a good quality show and it will really make your heart… feel things.”

IntVeld, however, brings another take. “People should come see the show because you are coming for a spelling bee but you left with… so much more.”